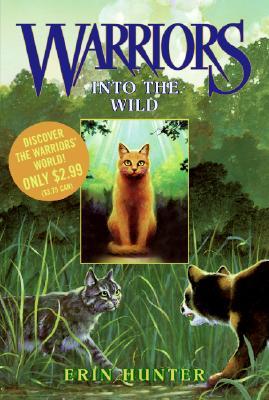 For generations, four Clans of wild cats have shared the forest according to the laws laid down by their warrior ancestors. But the ThunderClan cats are in grave danger, and the sinister ShadowClan grows stronger every day. Noble warriors are dying– and some deaths are more mysterious than others. In the midst of this turmoil appears an ordinary house cat named Rusty . . . who may turn out to be the bravest warrior of them all.

Warriors was my favorite series in elementary and middle school. I absolutely adored these books about cats. I own almost 30 of the books. (Yup, I was obsessed.) I’ve read all but the more recent super editions and the prequel series arc, Dawn of the Clans. Yes, there are a gazillion of these books and the later series aren’t quite as good as the first two (Warriors and Warriors: The New Prophecy), but I love these books with all my heart. I remember waiting eagerly for each new volume to come out, but since my mom couldn’t fathom paying $20+ for each book, she forced me to wait until the paperbacks came out for $6. (Ha! Back when paperbacks were that cheap! She did buy me hardcovers for my birthday or Christmas, so I have a few hardcovers among my mostly paperback collection that spans almost an entire bookshelf.)

I haven’t read the Warriors books in ages. And I’ve been dying to reread them all, from the very beginning and to the very end, probably for the last two years. Finally, I said, screw that TBR, screw those review copies — I’M GOING TO READ ABOUT CATS. The books are very quick reads (I can read one in a just a few hours) so it’s not as bad as you might think, making a commitment of rereading a series of over 30 books. I’m not going to marathon them, as much as I’d like to, but I’m hoping to power through one or two a week. The books make me happy and nostalgic. And are great for me to use to get out of a reading slump.

Into the Wild, the book that started it all that I found at The Strand one day, is about an ordinary house cat who decides to leave the comfort of his human home and join a clan of wild cats. Renamed Firepaw, he joins ThunderClan, where he becomes an apprentice and trains to become a warrior. He learns the way of the clans and their warrior code. And he’s suddenly caught in the midst of a battle, both physical and political, between the four clans and their various ambitious members.

Firepaw was actually a wonderful narrator. He’s completely new to clan life, so his new friend Graypaw gets to be the know-it-all and explain everything to him — and to us. Firepaw makes mistakes even though he means to do well. He’s new to everything, he has conflicting opinions, he wants to be taken seriously and trusted, but he’s disliked among the other cats because he used to be a “kittypet”. He gets angry, he speaks honestly. It was easy to understand his emotional state and sympathize with him. Since I’ve read these books before and know how Firepaw’s story plays out, it was quite nostalgic seeing his humble beginnings.

Graypaw was my favorite character for his boundless energy and his sarcasm. He’s kind, he’s funny, he’s a little bit oblivious, but he’s an awesome friend. I also adored Yellowfang, the snappish and judgmental ex-ShadowClan medicine cat who becomes a ThunderClan prisoner, and whom Firepaw befriends. Yellowfang has a very rich history that is only hinted at in this book, and she’s a character who will become very important later in the story. I loved Bluestar, ThunderClan’s leader, for her wisdom, her fairness, and her faith in Firepaw and his friends. Lionheart and Whitestorm were also awesome characters, terrific mentors who guide our young, energetic, and brave apprentices through everything.

There is, of course, a good versus evil type of plot going on. ShadowClan is at war with the other clans over hunting territory. They’ve driven out WindClan from their home, bullied RiverClan into allowing them to hunt within their, RiverClan’s, borders, and wage war against ThunderClan, the one clan that refuses to succumb to their warrior code rule-breaking. Besides the threat of ShadowClan and their dangerous warriors, there is also a political scheme at work inside ThunderClan. And this is one of my favorite parts of the series.

Right off the bat we learn that ThunderClan’s deputy, Redtail, was killed in battle by Oakheart, the RiverClan deputy. Tigerclaw, one of ThunderClan’s best warriors, killed Oakheart in revenge… or so he says. Tigerclaw’s apprentice, Ravenpaw, has a differing story, one where Redtail was killed by Oakheart. So, as our smart little Firepaw notices, if Redtail killed Oakheart, who killed Redtail? Having read the books and knowing what comes next, it’s amazing seeing how things are woven in and set-up for later installments. There is a lot of foreshadowing, and while it may be obvious sometimes, it’s used well and purposefully.

I could gush about Warriors all day but I’ll stop before I bore you to tears or before I spoil something major. Basically, I love these books and even though I know they’re not the greatest literature ever and have been criticized for messy writing and flat characters, I will always love them with all of my heart. I love cats, first and foremost. I love reading about anthropomorphic animals. I love the clan lore and warrior code, which I don’t find confusing at all, despite a lot of readers being unable to keep all the terms and rules straight. I love the intricate plot. I love the eclectic characters. I love their adventures and their mistakes and their battles and their triumphs. I still am upset by some deaths, and I hate when characters act stupid when they really don’t need to be. These books aren’t perfect but they’re such engaging stories. I’m completely unashamed to love these books wholeheartedly. They were my childhood and I will always be fond of them. ♦

Have you read Into the Wild?
If you haven’t, would you be interested to?
What’s your favorite book featuring anthropomorphic animals?
And do you like cats? Or are you a dog person?
Comment below letting me know!
And, as always, happy reading!

2 thoughts on “(Reread) Review — Warriors: Into the Wild by Erin Hunter”