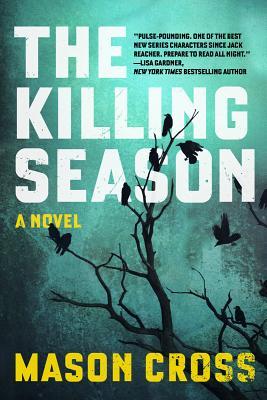 The first thing you should know about me is that my name is not Carter Blake.

When Caleb Wardell, the infamous ‘Chicago Sniper’, escapes from death row two weeks before his execution, the FBI calls on the services of Carter Blake, a man with certain specialized talents whose skills lie in finding those who don’t want to be found. A man to whom Wardell is no stranger.

Along with Elaine Banner, an ambitious special agent juggling life as a single mother with her increasingly high-flying career, Blake must track Wardell down as he cuts a swathe across America, apparently killing at random.

But Blake and Banner soon find themselves sidelined from the case. And as they try desperately to second guess a man who kills purely for the thrill of it, they uncover a hornets’ nest of lies and corruption. Now Blake must break the rules and go head to head with the FBI if he is to stop Wardell and expose a deadly conspiracy that will rock the country.

Slick, fast-paced and assured, The Killing Season is the first novel in the gripping new Carter Blake series.

The Killing Season is a strong and impressive debut from author Mason Cross. This action-packed and well-written thriller is a manhunt for the notorious serial killer sniper Caleb Wardell. Wardell (the “Chicago Sniper”) killed nineteen people and is just weeks away from his execution when he escapes and begins another killing spree. The FBI brings on outside specialist Carter Blake, who has an uncanny ability to find those who do not wish to be found. Blake’s backstory is only hinted at, but he’s a compelling main character with brains and spot-on intuition. He’s working with the Bureau, not for it, so he has a lot of freedom to operate how he wants.

Over the course of six days, Blake works with Agent Elaine Banner to track down Wardell. Banner is a single mom with ambitious career goals. She hopes that by catching Wardell she’ll earn a promotion. However, as the story progresses, she starts to trust Blake’s intuition and is torn between following protocol or going against the rules. She doesn’t have the ability to go off on instinct or hunch alone like Blake does, so by ignoring or disobeying orders she could jeopardize her career. I really liked Agent Banner. I think she was my favorite character, but Agent Steve Castle really grew on me (like, really grew on me), and I even found Caleb Wardell and his narrative to be fascinating, if disturbing.

The book jumps from viewpoint to viewpoint. Blake’s chapters are told in first person, and Banner and Wardell’s in third person. At first it took some getting used to the changes in narration, but I actually ended up liking the switching POVs. It made things interesting and gave different perspectives of shared experiences.

Overall, The Killing Season is an excellent book that had me up until 3am finishing it. It took me about a hundred pages to get really hooked, and by then I couldn’t put it down. (Just… one… more… page…!) There is plenty of action to be found here, and it’s so intense and well-visualized that I really felt like I was watching a movie, or, in the case of some scenes, I was there with the characters. I was completely immersed and read every single word of these sequences. This thriller has great characters and great plot, and even though a few events were a bit predictable (I correctly guessed a major twist/event at the end, way back in the novel’s beginning), it’s a stellar story that I wouldn’t have minded going on for far longer. I’m looking forward to reading more from Mason Cross. ♦

Have you read The Killing Season? If you haven’t, would you be interested to? What was the last thriller you read? What’s a favorite thriller you’ve read? Comment below letting me know! And, as always, happy reading!

2 thoughts on “Review — The Killing Season by Mason Cross”